I recently picked up a Glaree E03 Keychain Flashlight on sale, and was curious what was inside. The E03 is a clone of the ThruNite Ti3. I’ll put a mini-review down below, but this is a 1x AAA twisty keychain light with three brightness modes plus a strobe mode.

The flashlight is packed as a metal tin inside a small box. 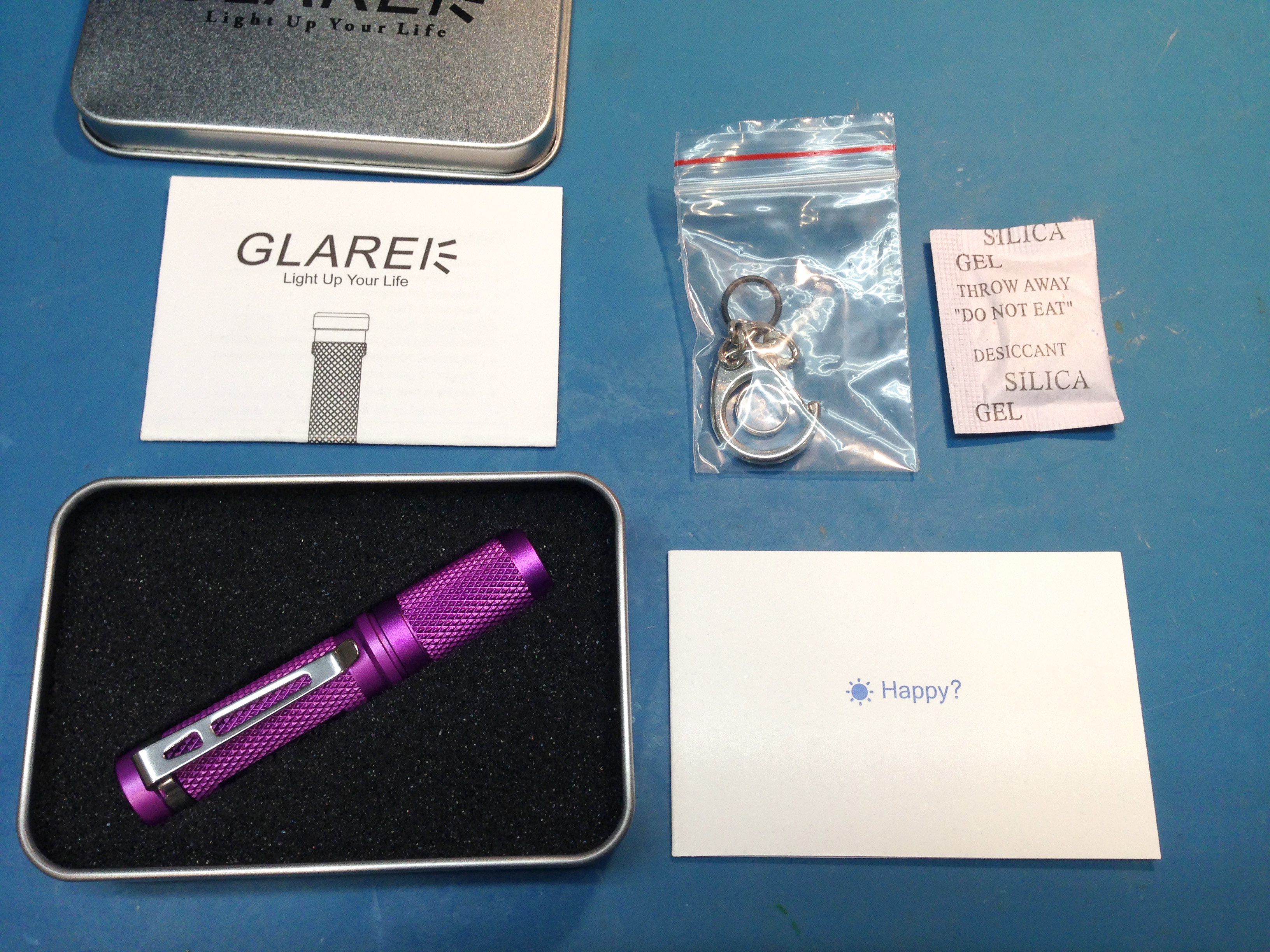 Inside the metal tin is the flashlight, in a nice foam insert, the manual, a customer service card in the style of Anker, a mediocre keychain sort of attachment, and a tasty packet of silica crystals.

I got the purple colored flashlight. It’s a nice purple color, pretty purpley. The anodizing seems sufficiently robust, and the clip is plenty strong and sized big enough to clip over jeans or similar. The top unscrews, exposing a battery compartment with a somewhat anemic spring, and the head of the flashlight with a small PCB. Some measurements:

Looking into the front of the light shows the emitter, a black centering ring, and an orange-peel reflector (6.25 mm deep, 12 mm dia). On the inside of the head, a PCB is visible with two small holes and a (+) contact button. There are two rubber o-rings, one on the main threads of the light and another where the front glass rests against the head.

With a set of tweezers stuck into the holes on the PCB, I was able to unscrew the pill from the head of the flashlight. The pill seems to be aluminum, the black centering ring sticks through two holes in the top of the pill, holding the emitter PCB (10 mm dia.) in place. There is a small amount of white thermal paste under the emitter PCB.

The emitter board says “XPG” below the footprint, and given that this is a Ti3 clone, Cree XP-G2 is a reasonable guess. The markings visible on the emitter certainly look the same as an XP-G2 die. The emitter measures 3.40 mm square by ~2.4 mm tall.

After desoldering the wires from the emitter PCB and removing the driver PCB from the pill, I cleaned up the driver PCB a bit and started trying to decipher it. The PCB measures 11.25 mm in diameter, 12.3 mm measured across the tabs. 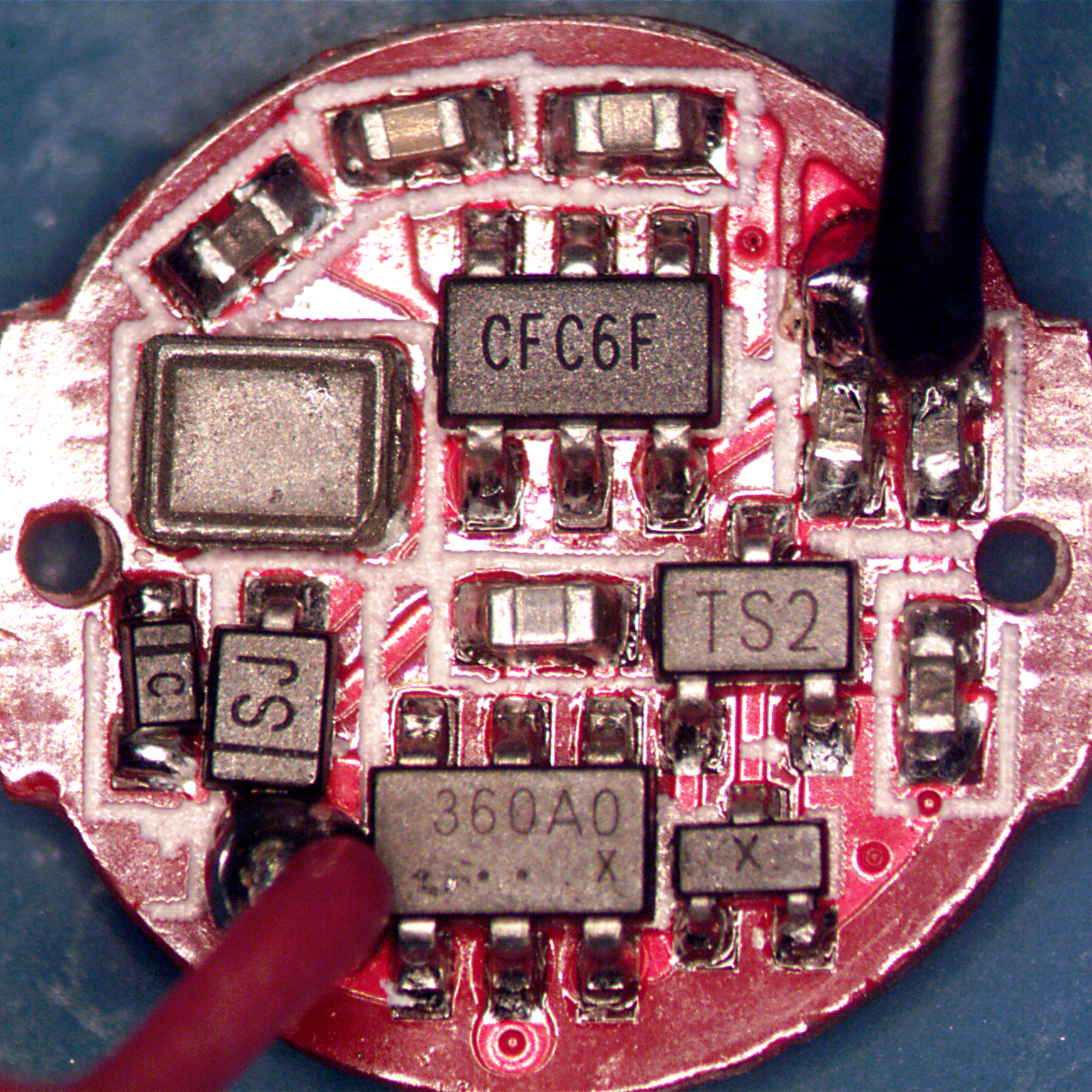 Here is what I was able to determine with a little poking around:

My best guess for the schematic is below. This may not be the exact circuit (I did not depopulate the board, nor did I ohm out most of the nets), but I believe it is fairly close. 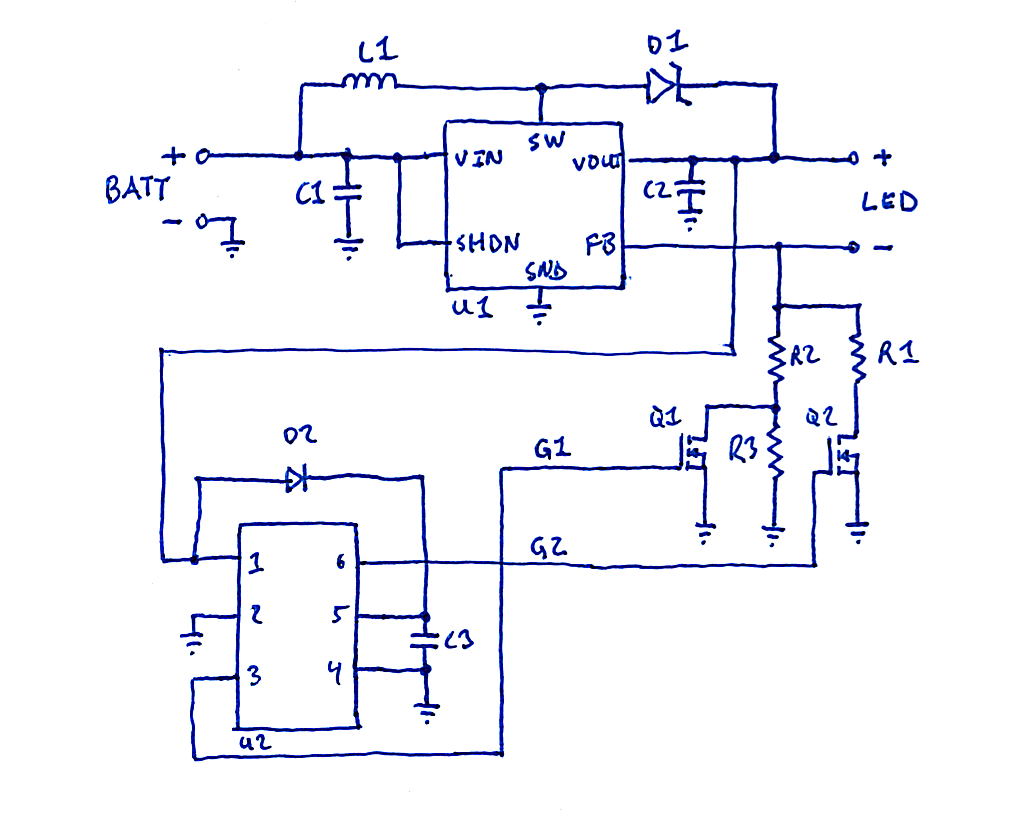 Pretty self-explanatory, there is a barebones boost converter with switchable sense resistors, controlled by a small MCU with an off-time capacitor for the blinky mode.

I attempted to change R3, the low-side sense resistor for low mode, hoping to change low mode to proper moonlight. However, I found that the SD3303 appears to have a minimum forward current, and increasing R3 does not noticeably reduce emitter current above when increased above its production value of 10 Ω (I tried 30R1, 49R9, 100R, and 309R with no success). It seems that the boost converter has a minimum current that it will maintain; when the sense resistor is above 10 Ω it will no longer regulate: the forward current does not decrease and the feedback voltage rises above the nominal 95 mV.

Form factor-wise, this is a decent keychain light. I don’t carry a keychain light (my EDC is a BLF 348 tucked into a pocket or waistband) and so the appeal is somewhat lost on me, but the E03 is entirely small enough to fit on a keychain.

While I don’t own a Thrunite Ti3, as far as I can tell it is almost exactly identical for the modes: they both have three modes, but the low on the E03 is far brighter than what I would call “moonlight” (the Amazon description states “0.1 lm”, and I don’t believe that for a second). Basically, the mode spacing on the E03 is mostly useless: you have “medium”, “slightly brighter”, “a bit brighter”, and a strobe mode (accessed by “double-twisting” rapidly).

Again, this is a Ti3 clone, and there is only a $3 price difference currently, so unless the E03 is very on sale, there really isn’t a reason to buy this light. The lack of moonlight is particularly disappointing. That said, for ~$11, it’s an aluminum keychain light with (probably) a Cree XP-G2. Build quality is decent, and it is at least somewhat water resistant.