I’ve been looking for a simple 1x18650 straight light with a smooth reflector and e-switch for a while; Sofirn asked me to review this light and I jumped at the chance. I wanted a light specifically for trailrunning and other outdoor pastimes (to complement a headlamp) and this checks most of the boxes. I was sent this light free of charge by Sofirn to review, but it should go without saying I do my best to remain unbiased. I’m also slowly fleshing out my review process, so any feedback is appreciated!

The SP32A V2.0 can be purchased on Amazon for under $30, either as the light by itself in black or gold, or as a bundle including a battery and charger with a black light. I got the bundle, and given that the bundle seems to vary from $1 cheaper to $3 more than the light alone, the bundle is the most economical option. This is a excellent “starter” light; the bundle option makes a great gift for someone who doesn’t have batteries or a charger.

This light is the successor to the SP32A. My understanding is that the V2.0 has better thermal control, and some UI tweaks, but I don’t have the SP32A so I cannot compare. Also, the older light lacks the indicating switch of the V2.0. For the sake of brevity, I’ll henceforth refer to the SP32A V2.0 as “SP32A”.

The SP32A arrived in standard Sofirn box. The bundle includes the SP32A with clip and a battery inside, USB charger, micro-USB cable, a manual in English, German, and Russian, an “Anker-style” happy/not-happy card, a lanyard, two extra o-rings, and a tasty packet of silica gel. Inside, there is a cardboard disk keeping the battery from contacting the rear spring during shipping (good!). The manual is well-written and does a decent job explaining the modes and the UI.

The charger has a stated output of 4.2V, 0.75A, and says it will charge 26650, 18650, 16340, 14500, and 10440 lithium-ion. The charger has a single indicator light that is red when charging, and green when finished. It stopped charging the included battery at 4.19V. Perfectly usable, but otherwise unremarkable. I like that they include a charger rather than a USB-rechargeable battery as it makes it easy for a non-flashlightist to buy this light plus a spare battery or two and have everything necessary.

The included battery is an unprotected button-top 18650, with a stated capacity of 3000mAh. A test with an analyzing charger suggests this is probably true (I don’t have the best analyzing charger in the world). It’s a perfectly fine battery for this light. 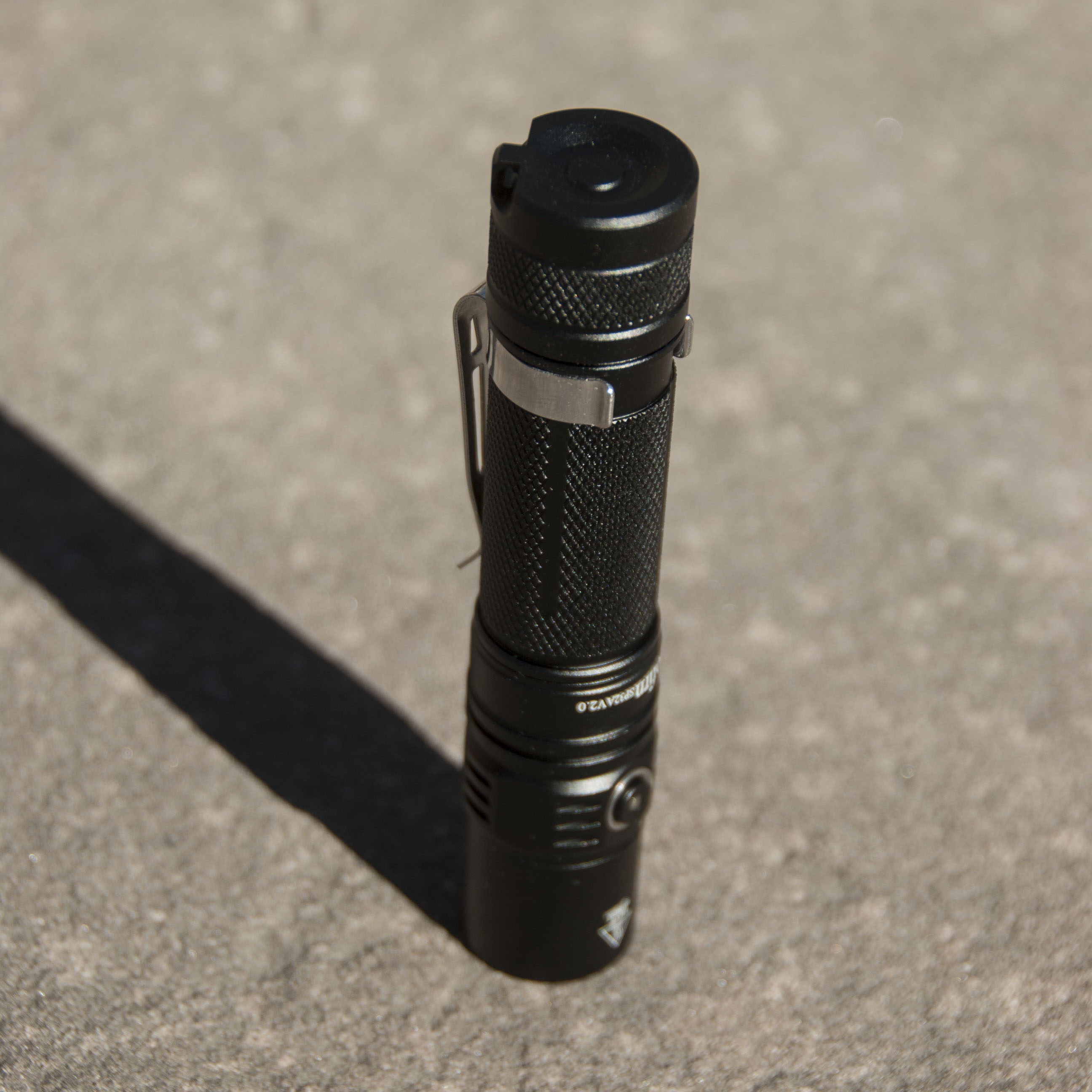 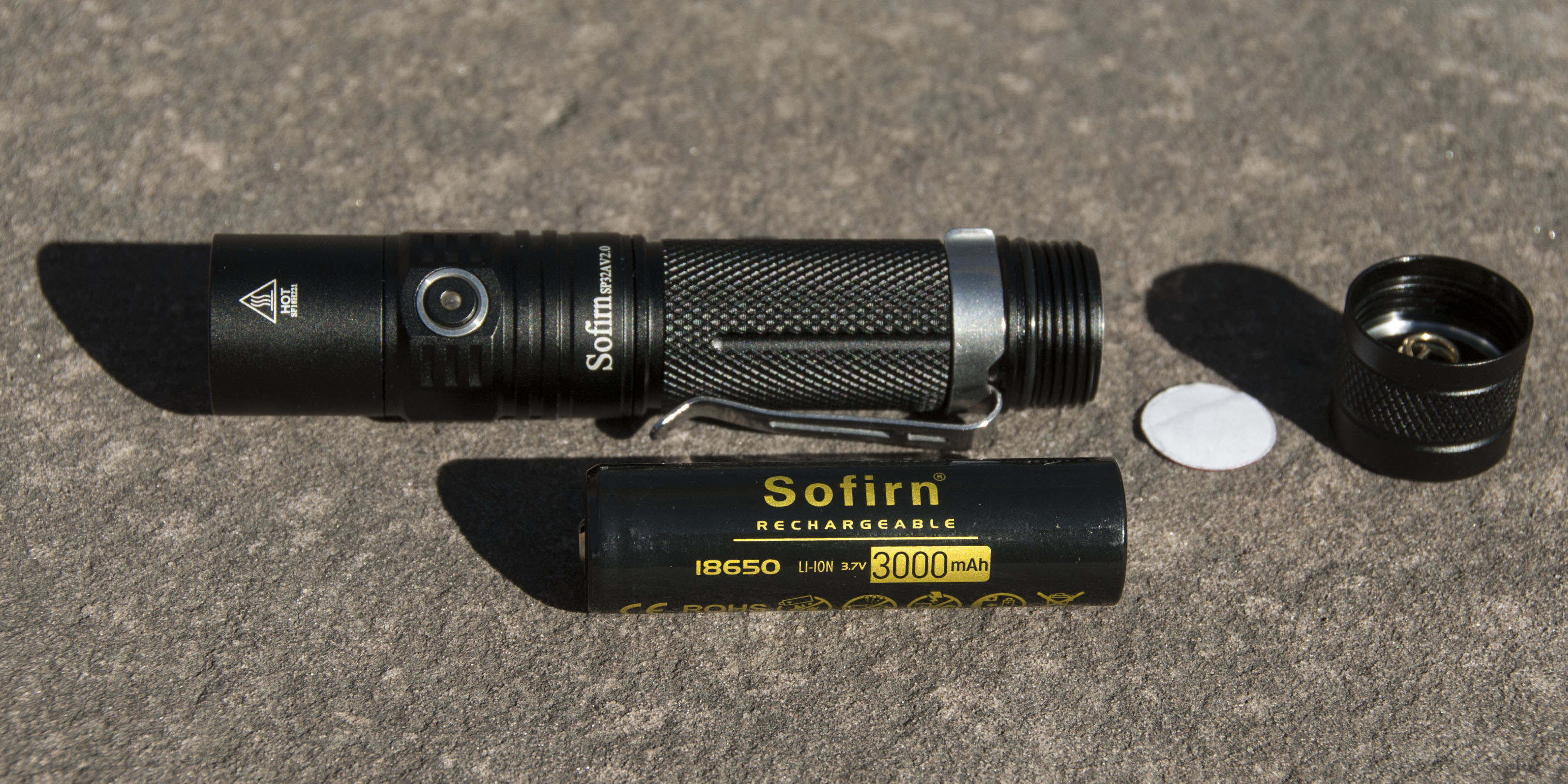 This is a well-built light with mildly aggressive knurling on the body tube and tailcap, solid o-rings, and square-cut threads on the body tube and bezel. The o-rings came with a mere sheen of lubrication and the threads are unlubed; the light would benefit from a touch of lube. The surface finish and printed legends are perfect, and the head has a pleasing shape with five flats preventing it from rolling away if you don’t have the clip. The clip is somewhat disappointing: while it’s not weak by any means, it’s not deep carry, and it’s fairly short. From the end of the light to the top of the clip, it’s 23mm, and the clip itself measures 45mm total. Extending the clip up to the tailcap would be a great improvement. However, it grabs the light well and will certainly hold the light in a pocket. 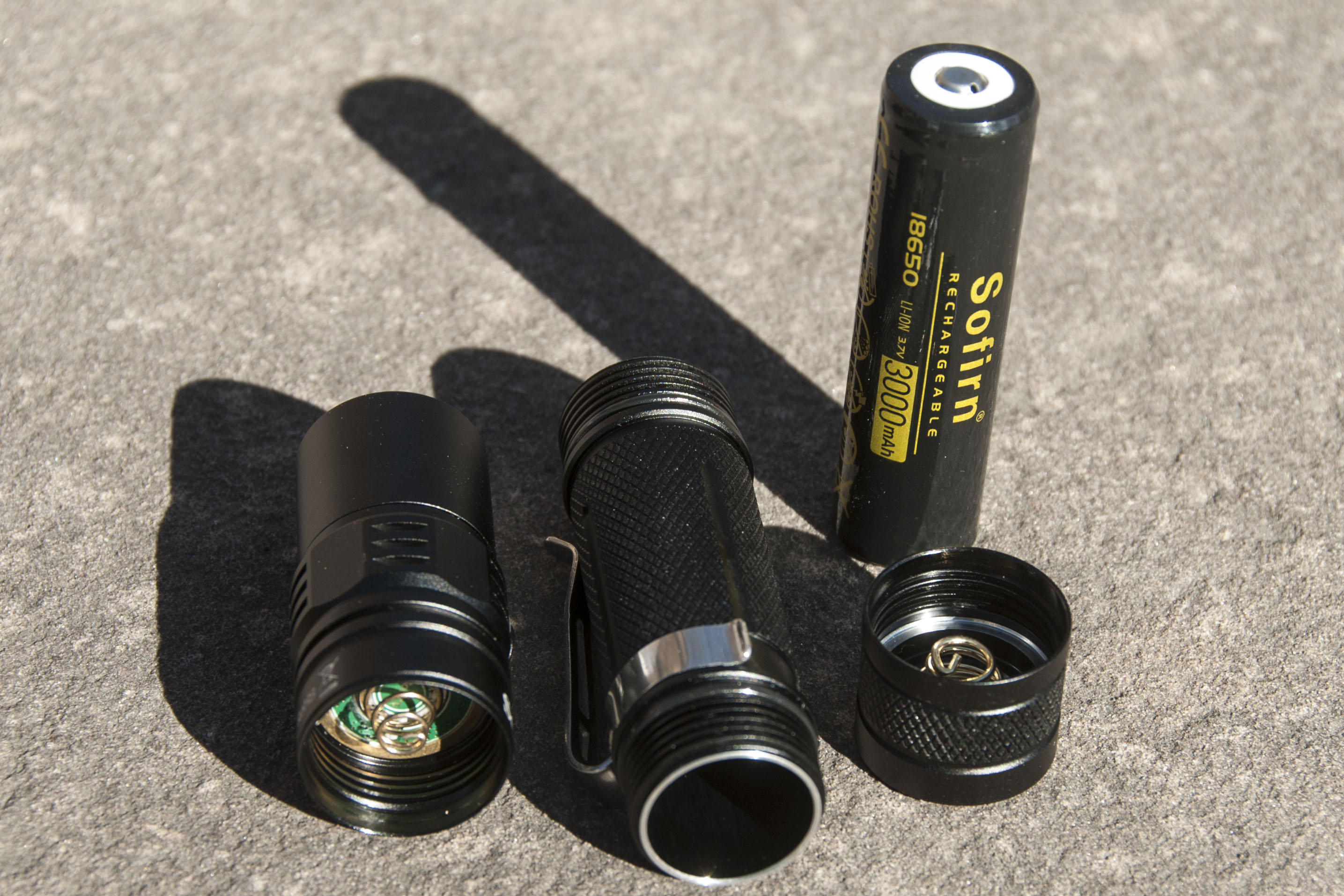 There is a fairly beefy spring in the tailcap and a slightly less beefy spring on the driver PCB. The body tube can be reversed, allowing the clip to be reversed, although I’m not sure why you’d want to do this. The springs prevent the light from turning off by mechanical shock, I was not able to turn the light off despite dropping it on the floor and smacking it about a good bit. The e-switch protrudes about 1.5mm and has a satisfying feel.

The driver PCB assembly appears to be press-fit or glued, and appears to have two PCBs (one parallel to the e-switch). I did not disassemble the driver. The front lens is AR-coated glass, and the reflector is a smooth reflector about 14mm deep. It gives the light a fairly throwy (for this bezel size) beam at the cost of a “Cree rainbow”.

The SP32A is a pretty standard size for a 1x18650 light: 123mm long, 25mm diameter at its widest point. If anything, it’s a little on the long side; it’s a few mm longer than both the BLF A6 and Convoy S2+. Compared above, left-to-right: stock BLF A6, Convoy S2+ with 60° TIR optic, and Sofirn SP32A V2.0. Finally, it will comfortably tailstand, and the lanyard hole is about 2.5mm in diameter, making it fairly easy to get lanyards through.

The SP32A has a two-group user interface. Group 1 is 6 modes, four brightness modes plus turbo and strobe, click to advance, hold to off. Double-click for turbo, triple-click for strobe, mode memory for the normal modes. In turbo and strobe, one click returns to last mode, including off (so double-click from off goes to turbo, and a single click goes back to off). This is a straightforward multi-mode UI, and probably familiar for many people. Group 2 is a ramping group, click for on/off, hold for ramp up/down, double click for turbo, and triple click for strobe. Like group 1, there is mode memory and one click in turbo/strobe return to the last mode. The ramp is very nice, it appears fairly linear and has a short blink at each end. Ramp goes from Eco to Turbo, no reduced ceiling.

I really like the ramping group of this flashlight, however, there are two things that aren’t quite right: the lowest mode (both “Eco” in group 1 and the lowest of the ramp) is too high. I don’t have a integrating sphere, but to my untrained eye it appears roughly equal to the second mode on my BLF A6, one up from moonlight. The manual states 5 lumen; I expect a moonlight mode less than 1 lumen at least, and Zebralight enthusiasts likely expect less than 0.1 lumen. This is unfortunate, although it may avoid confusion from non-flashlightists (“hey why isn’t my flashlight on?”). The second issue is that there’s no shortcut to the lowest mode. Long-press from off would be the obvious choice here, but it does nothing. On the high end, the manual claims 1300 lumens, which I believe, give or take 100 lumens or so.

To switch modes, hold the switch until the light blinks twice. In group 1, this happens quickly, in group 2, you will have to wait for it to ramp all the way up or down, and then wait a few seconds longer.

The e-switch indicator displays the battery state for ~5 seconds when the light is turned on. Green for good, red for low, blinking red for too low. This is fine, but it would be cool to have (perhaps as an option) the e-switch be on when the light is off as a beacon, making it easier to find the light in the dark. This light has no low-voltage protection; I verified this with Sofirn. The e-switch indicator will flash red, but the light will not turn off. This is not good, and a curious choice from Sofirn. If you know the battery is low, why not turn the light off?

The SP32A V2.0 uses a Cree XP-L2, which is not known for being good looking. Combining that with a smooth reflector and AR-coated lens does it no favors. The tint shift across the beam is fairly apparent, the so-called “Cree rainbow”, with a slightly greenish hotspot, greenish corona, and a hint of purple from the AR-coated lens on the edges. The smooth reflector gives this a reasonably throwy beam, albeit with some ring artifacts around the hotspot. It’s not easy to take photos that accurately reflect tint and color temperature, so take this with a grain of salt, but here’s a white wall shot. 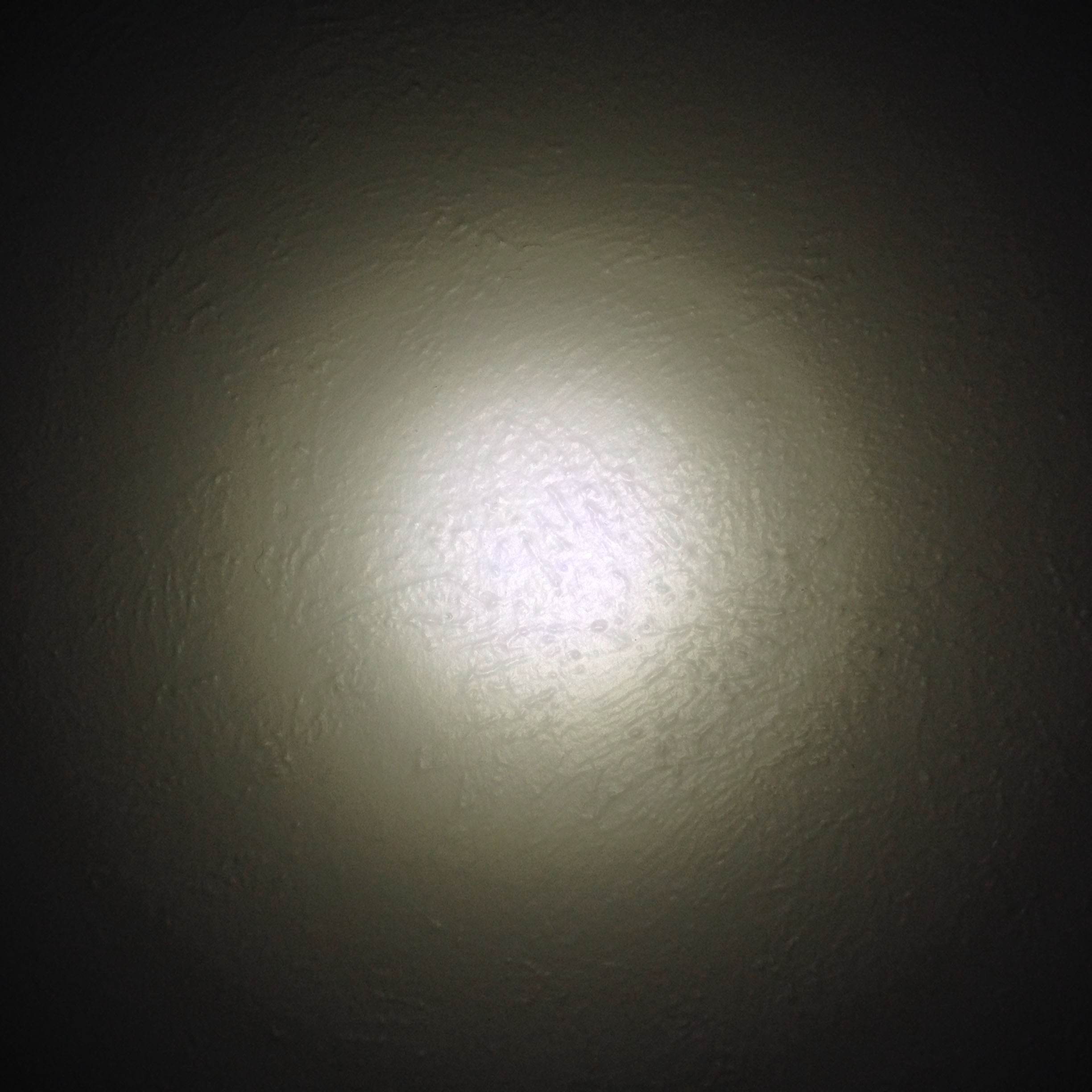 In any real-world environment, the beam is perfectly serviceable, although the overall tint and low CRI leaves something to be desired.

Here is the SP32A compared to my BLF-348 with a 5000K 219C (not a 219B because I’m not special) and a Convoy S2+ with a 60° TIR optic. Because this was shot on a phone with auto white balance, I’ve had to do some color correction to hopefully illustrate how it appears to my eyes, but it’s still not perfect. However, I do think this gives a good idea of the throwiness of the SP32A, you can clearly see the tighter hotspot and a gently tapering corona with some ringing, whereas the 348 has a broader beam, and the S2+ has a huge floody beam with no hotspot.

I’ve had the light for a few weeks, so I’ve had the time to use the light quite a bit. I’ve taken it on several hikes in very cold temperatures, and done a bit of work under a friend’s house with it. I had no issues whatsoever. My other straight lights are all tail clickys, so an e-switch straight light is very nice, as the UI makes it a lot smoother to use. In particular, when hiking, I would put it in group 2 (ramping), and leave it on the lowest setting. When I needed to see something further down the trail, I could easily ramp up, and then ramp back down. Had I encountered an emergency or something scary, I could easily double click for turbo, and then drop back down. Sofirn nailed this part of the UI. However, I do wish the low mode was considerably lower, as I usually hike with a headlamp set at perhaps 1 lm and I’d like the SP32A to match that. Also, the tint isn’t the prettiest in nature. See my emitter swap writeup for my solution to this.

This is a great full kit flashlight bundle, perfect as a gift or for a starter flashlightist. At the price point, it’s got both excellent quality and a decent ramping UI, which is commendable. I believe an e-switch UI is much more friendly to non-enthusiasts, and this is a good e-switch UI in an inexpensive light. From a practical standpoint, it’s plenty bright, very sturdy, and the beam quality is fine. Yes, the tint and CRI could be better. Will you notice it while stomping through your basement looking for the Christmas lights? No.

Right now, the SP32A V2.0 can be purchased with a code from Sofirn for even less than the Amazon price, see this thread for details.

Here are some other reviews of this light, all excellent: